“My parents showed me the value of giving back to the community, and this scholarship rewards a young person with the same spirit.”

– Julie Sloan, who launched the scholarship in honor of her parents 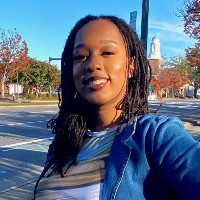 Akilah, a volunteer with YVC in Hampton Roads, served 254 hours with YVC while balancing a variety of other volunteer and extracurricular activities. Akilah joined YVC at the age of 13, quickly became a leader, and started a YVC club at her own school. During her time with YVC, Akilah was awarded the 100-in-One Award for 100 hours of service in one year, was a member of the YVC Hampton Roads Youth Advisory Board, and was a member of the YVC International Youth Advisory Board. Akilah was selected as a Bank of America Student Leader for 2022 and will stay involved at her YVC in Hampton Roads as a Team Leader where she will continue to shine her light and lead youth in volunteering.

Akilah plans to attend the University of Mississippi in the fall and pursue journalism with an emphasis in fashion promotion and media, with dreams of becoming a fashion editor.